New toy reveals and a costume exhibit featuring the new Sith Trooper may be cool, but the best Star Wars news that has come out of SDCC so far has been the reveal that a new comic book series dedicated to the rise of Kylo and the Knights of Ren is in the works.

The series will be dubbed, The Rise of Kylo Ren, and it will be written by Charles Soule, who helped to reveal it to the world via Twitter. He basically told us all that our faces will not be ready for the story he plans to write, which will drop before the release of The Rise of Skywalker, and I’m sure it will add a few wrinkles to Kylo’s story that we will see play out in full in that film. One would think that the series could pick up right after the fall of Luke’s rebooted order, but details are sparse at this point.

I would like to think that the fact that it’s been dubbed the Rise of Kylo, would lend itself to telling an origin story of Ben’s alter ego and his Knights, so I do hope it focuses on freshly fallen Ben, and not a year or two before TFA Ben.

The series will feature four total issues, and will kick off this December, so stay tuned for more details. 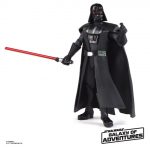