Ello Asty, an Abednedo from the planet Abednedo, adds to the list of fantastic looking aliens featured in the Star Wars universe. He made his debut, and met his ultimate demise, in The Force Awakens during the Battle of Starkiller Base.

Ello’s time with the Resistance started after a stint with the New Republic’s defense fleet, but was the tension between the First Order and New Republic began to rise, Asty decided his superior skills as a pilot were better served in the newly formed Resistance. Before the Battle at Starkiller Base, Asty was a part of the Resistance spy structure. He played a pivotal role in communication with Kazuda Xiono, a Resistance spy on the Colossus Refueling Station, while Poe Dameron was out of contact.

Asty served in Red Squadron during the attack on Starkiller Base. He was killed during the final strafing run on the station thermal oscillator by ground fire.

Disney+ Is Required Watching for Star Wars Fans in 2019 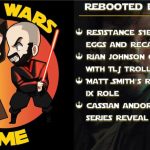