Disney and Lucasfilm have released a clip from the upcoming episode of Star Wars Resistance, which is titled, “The New Trooper”.

In the clip, Kaz and Yeager are discussing the First Order’s presence on the Colossus and how they’re starting to catalogue everyone on board. Kaz produces a data chip that BB-8 reads, and it contains a map of the galaxy that has red dots all over it. Yeager guesses that the dots could be First Order fleets, but Kaz can’t quite comprehend how they’ve become so strong, because he explains that they have a larger fleet than the New Republic. At this point they put the pieces together and realize that the First Order wants the Colossus for a refueling station for its fleet.

It definitely looks like the First Order plot will remain front and center as the first season of Resistance races towards its finish, so stay tuned for our Resistance coverage for “The New Trooper” starting next Monday right here on SWT! 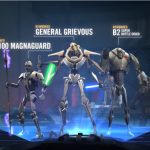