It looks like Star Wars PR may have sent out some unintentional info for the July lineup of Bad Batch episodes.

According to leaker Jordan Maison, the latest PR email from Lucasfilm included all of the episode titles for the 5 episodes releasing in July.

The standout title here is definitely War Mantle. We know that Project War Mantle is the initiative to replace Clone Troopers with ‘elite’ non-clone, mostly human, troopers from around the galaxy. We saw the beginning of project War Mantle earlier in the season when we were introduced to Crosshair’s new squad which was composed of all non-clone troops that were recruited to the Imperial war effort. Obviously, this integration did not go as smoothly as Tarkin would have liked given that Crosshair had to shoot one of the new recruits for not following orders.

Could this episode be when Project War Mantle kicks into high gear and we see the Imperial war machine so into full swing? We will find out on July 30th! 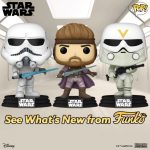