Jon Favreau was on Jimmy Kimmel to promote The Lion King, but Kimmel still got some Star Wars news out of him towards the end of the interview.

Kimmel asked Jon about his Star Wars project, The Mandalorian, which Favreau explained as a time period in which, “All hell is breaking loose in the outer rim, and it’s about the scum and villainy that now wants to take out the rule of law. What happens? Chaos takes over.”

That wasn’t the news though, that came a bit into their talk on Mando when Jon said that Season 1 is wrapped and launching in the fall. This we knew, but he followed it up by revealing that he’s currently writing Season 2. This is awesome because the season hasn’t been officially ordered yet, but Jon’s reveal all confirms that it has. We just haven’t been given the official press release from Lucasfilm and Disney to make it proper.

I don’t think anyone who saw the Mando reveal at Celebration had any doubts that it would get a second season of the story warranted it, so I’m glad to know for sure now that the adventure will continue past 2019.

Stay tuned to SWT for all your Star Wars needs! 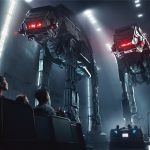