The Last Jedi may be the most controversial piece of Star Wars content ever made. We all know how it has affected the Star Wars fandom, and we also know that it didn’t exactly line up with character expectations of the franchise’s main star, Mark Hamill.

Now, it seems another actor has voiced a bit of displeasure with their character arc in The Last Jedi. John Boyega spoke with Hypebeast recently and laid out his problems with Finn’s storyline in TLJ.

“The Force Awakens I think was the beginning of something quite solid, The Last Jedi if I’m being honest I’d say that was feeling a bit iffy for me. I didn’t necessarily agree with a lot of the choices in that and that’s something that spoke to Mark [Hamill] a lot about and we had conversations about it. And it was hard for all of us, because we were separated.”

The primary cast of the new trilogy saw themselves separated for the entirety of The Last Jedi until the film’s final moments when they were reunited on the Millennium Falcon. Boyega was hoping for a bit more consistency with the original trilogy films when it came to the character journeys in TLJ.

“I guess the original Star Wars films there was much more of a trio feel where it was essentially about Luke’s journey, but Han and Leia there was a strong dynamic, which I think, I don’t know how quickly we’re going to be able to establish that longterm dynamic with [The Rise of Skywalker]. But if it’s exploring that dynamic, then that would be cool.”

I agree that it will be a bit harder to build the group dynamic between these characters, but one thing that TLJ did do was allow each character to develop on their own instead of being reliant on the group for progression.

From what we have seen so far, it seems like The Rise of Skywalker will reunite Rey, Finn, and Poe as they look to bring an end to the ultimate evil that lies ahead of them. 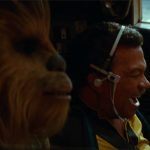 Entire Soundtrack for Star Wars: The Rise of Skywalker Posted for Awards Considerations