If there’s one nice thing you can say about the Empire, it would be that their armed forces look rad as hell thanks to the various Stormtrooper variants and armor kits that they employ. Their outlook on the galaxy may be way off, but Imperial forces most definitely know how to dress, which is probably why fans have been cosplaying as Stormtroopers for decades at this point in time.

Based on a new report from Making Star Wars, it sounds like a brand new Trooper variant will be showcased giving cosplayers a new kit to consider, and the variant will be a take on a Trooper design from Star Wars Jedi: Fallen Order.

You may want to bail now if you’re going for a spoiler-free take on Obi-Wan Kenobi.

MSW is reporting that a new Purge Trooper variant will be featured in Obi-Wan Kenobi, as well as Jedi Fallen Order 2. Apparently this version of the Purge Trooper will have a reworked helmet that MSW describes as being similar to what a Shore Trooper wears, but not just a full on black Shore Trooper helmet.

According to MSW, fans will see these new Purge Troopers in action alongside the 501st and Vader hunting down Kenobi as he’s on a ship headed to Jabiim. This encounter is rumored to take place around the third or fourth episode of the series.

Finally, MSW has heard that Jedi Fallen Order 2 will be shown off at Star Wars Celebration, which we speculated would happen. He also reports that this will be the first time fans get to see the new Purge Troopers.

Nick and I will talk more about this report on today’s episode of the SWTS, so don’t forget to tune into the Star Wars Time Show on a weekly basis via our podcast platforms or via YouTube if you prefer the livestream angle. 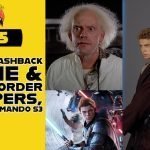