J.J. Abrams sat down with Collider to talk about the 10th anniversary of Super 8, so naturally he was asked about his Star Wars films, in particular the importance of having a plan for them narrative wise.

While J.J. talked about how plans can sometimes get in the way of a narrative, he did ultimately come back to the fact that knowing where a film is going is the most important aspect of storytelling.

“I do think that there’s nothing more important than knowing where you’re going.”

“You just never really know, but having a plan I have learned – in some cases the hard way – is the most critical thing, because otherwise you don’t know what you’re setting up. You don’t know what to emphasize. Because if you don’t know the inevitable of the story, you’re just as good as your last sequence or effect or joke or whatever, but you want to be leading to something inevitable.”

He doesn’t necessarily specifically point out Star Wars, but the question he was asked that led to this quote was directly about the idea of having a firm narrative plan for the three films versus the creative hand-off approach that Disney used, so you have to consider that the quote above is in reference to the Sequel trilogy.

We’ve discussed this many times on the show as being the main factor in the Sequels not feeling like a cohesive trilogy, and there’s really not much more to say on it. The films are done and will never be changed, but it does sound that with some hindsight, J.J. thought that a plan should have been in place for this films, and I think many fans agree with that assessment. 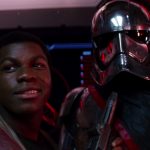