J.J. Abrams recently sat down with Fast Company and discussed a bit of the process he went through when he decided to return to finish the new sequel trilogy, and he offered up some interesting insights into it.

Abrams discussed how the story came to be, and how he approached the shoot, which had him under a deadline to hit the film’s December 2019 release. He said:

“I’m not complaining when I say this, but it was having to make decisions based on gut. When Damon Lindelof and I created Lost, we had essentially 12 weeks to write, cast, shoot, cut, and turn in a two-hour pilot with a big cast. And that was a crazy short amount of time. The benefit of that was, we didn’t have time to overthink. There wasn’t time to get studio notes that end up sometimes taking you in lateral positions and making you adjust things—death by a thousand cuts—to a place where something doesn’t resemble what it should be, and you can’t remember why you got there or how.”

It sounds like Episode IX was mostly written and shot on the fly based on J.J.’s own fandom, and of course threads that were started in the original and prequel trilogies, as well as what Johnson left him with in TLJ. I kinda dig that not too many people were pulling at him, or giving him notes to change ideas he and the creative teams put forth. Sometimes the “too many cooks in the kitchen” saying is too true, especially with creative works, so I do appreciate that they seemingly let him do his thing with minimal intrusions.

He was also asked how he built the story based on the narrative Johnson told in TLJ, and his answer is pretty refreshing. He doesn’t think that anything needs corrected per se, but he does imply that he picked threads back up from TFA that may have been ignored in TLJ, and he also mentions that elements from the overarching Skywalker saga will also be present to give the nine film saga a cohesive feel.

His exact quote is below:

“I had some gut instincts about where the story would have gone. But without getting in the weeds on episode eight, that was a story that Rian wrote and was telling based on seven before we met. So he was taking the thing in another direction. So we also had to respond to Episode VIII. So our movie was not just following what we had started, it was following what we had started and then had been advanced by someone else. So there was that, and, finally, it was resolving nine movies. While there are some threads of larger ideas and some big picture things that had been conceived decades ago and a lot of ideas that Lawrence Kasdan and I had when we were doing Episode VII, the lack of absolute inevitability, the lack of a complete structure for this thing, given the way it was being run was an enormous challenge.”

Again, I appreciate that he’s both rekindling elements that Johnson may have ignored in TLJ, but also that he’s not just going to retcon the whole damn thing. He sounds like he and his team took the story where they ultimately wanted it to go, but with a narrative that will carry on some of what Rian put forth, but one that will also resolve the core Skywalker themes that were started way back in 1977.

I’m expecting Episode IX to be freaking epic, so here’s to get a trailer and more details this Friday from Star Wars Celebration! 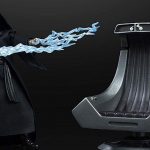