Deadline is reporting that Ivanna Sakhno (Pacific Rim: Uprising) has been cast in the Star Wars: Ahsoka series for Disney+. She will be joining Rosario Dawson, Natasha Liu Bordizzo, and Hayden Christensen, who will be playing Ahsoka Tano, Sabine Wren, and Anakin Skywalker respectively.

While the other known actors are playing existing and quite popular Star Wars characters, Sakhno will apparently be playing a brand new character. It’s not clear if this character will be good, bad, or in the middle like a Boba Fett, but based on Ivanna’s appearance, she could play any Star Wars archetype.

The Ahsoka series is reportedly going to start filming in March of 2022, and it should air sometime in 2023.

Nick and I will talk more about this casting news on today’s episode of the SWTS, so don’t forget to tune into the Star Wars Time Show on a weekly basis via our podcast platforms or via YouTube if you prefer the livestream angle. 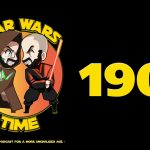