Fans have been wondering when the Obi-Wan Kenobi series will air on Disney Plus this year, and thanks to a deleted Tweet from a Disney Plus employee, it’s looking like May 2022 will indeed be the month it hits the platform.

Here at the SWTS we’ve been eyeing May the 4th as a potential date for Kenobi to air its first episode, which would be similar to how the Bad Batch series was first introduced last year, so the month itself just feels right. What’s even better is that Brandon San Giovanni, who is an enterprise program manager for Disney Plus, deleted the tweet below after he first shared it once the Obi-Wan Kenobi comic book mini-series news hit.

This is a dead giveaway, and the quick deletion by Brandon only reinforces the Kenobi Series’ May launch. With this knowledge in tow, we can speculate that we will get the first trailer for it late in March, or early in April. That’s at least the schedule Disney Plus followed for The Book of Boba Fett, which got its first trailer about eight weeks before its 12/29 debut. 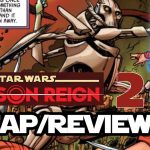