Hot Toys is really trying to milk us Mando fans of our cash with their latest reveal, which is essentially the Mandalorian figure we should have got for Season 2 instead of the one that Hot Toys is currently selling.

This new set is pretty slick, but it’s nothing more than an updated accessories version of the full Beskar Mando set that many 1/6 scale collectors already secured. This new deluxe set ups the ante with chromed armor, the correct thigh pad, a Din head sculpt, Grogu in a messenger bag, and a collection of accessories to recreate Mando’s return to Mos Eisley in S2E2 after his speeder gets blown up.

Like I said, this deluxe set is pretty freaking dope, but it’s a hard one to swallow if you’re like me and already coughed up nearly $400 for the other full Beskar Mando deluxe set. It would have been nice if Hot Toys just did an Accessories Bundle for collectors like myself, but hell hath not frozen over yet, so if you want this version of Mando, you will have to pay up $375.

There’s also a Collector’s Edition for $330, but it lacks some of the S2E2 bells and whistles.

Both sets can be pre-ordered today from Sideshow.

ABOUT THIS SIXTH SCALE FIGURE SET

The Mandalorian™, known to a few as Din Djarin™, is a battle-worn bounty hunter, making his way through a dangerous galaxy in an uncertain age. In two seasons of the highly acclaimed The Mandalorian live-action series, Star Wars fans were captivated by Mando’s extraordinary journey to return the young alien foundling Grogu™ to his kind!

Sideshow and Hot Toys are thrilled to bring an incredible addition to its widely popular The Mandalorian collectible series and officially introduce the new The Mandalorian and Grogu Sixth Scale Collectible Set!

Meticulously crafted based on his latest appearance in the live-action series, the Mandalorian sixth scale figure features a newly developed head sculpt with astonishing likeness, chrome-plated beskar helmet and armor pieces, finely tailored outfit, an attachable jetpack, Mando’s iconic rifle and blaster, a selection of weapon firing effects, a darksaber, a beskar spear, and a display base!

Moreover, this collectible set specially features a standing Grogu and a pouch for Mandalorian to carry the youngling.

Don’t miss the chance to have the Mandalorian and the Child in your Star Warscollection.BrandStar WarsManufacturerHot ToysTypeSixth Scale Figure SetArtistStudio HIVE (3D Design)

Item shown is a prototype. When shipped, the final production piece may differ in appearance. 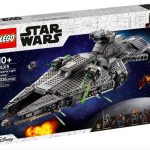