Thanks to our buds over at Exclu Magazine, we got word about a re-issue of sorts for the 1/6 scale Death Trooper figure from Hot Toys.

It’s technically not a full re-issue since this version if based on the Death Troopers from The Mandalorian, so it’s lacking a few accessories that the Rogue One version got like the longer rifle and grenade pouch, but if you missed out on this gem before, now’s your chance to pick him up. 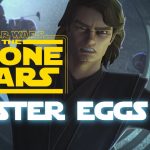 The Clone Wars Season 7, Episode 3 Easter Eggs and References – “On the Wings of Keeradacks”