Well it didn’t take Hot Toys long to payoff on its Bo-Katan tease from two weeks ago, because today they high-end collectible makers has released glamour shots and pre-order details for the excellent looking figure.

The figure is retailing for $285 over at Sideshow where she is available for pre-order, and it is set to ship between next April and June. It comes with two heads, one featuring Katee’s face, and the other will be Bo’s nite owls adorned helmet. She will also come with a few accessories. I’m guessing the $285 price accounts for her two head sculpts, because a figure of this nature is usually in the $250-260 range. Either way she looks amazing and the artists definitely captured Sackhoff’s appearance perfectly.

You can check out additional images and details below.

“I am Bo-Katan of Clan Kryze. I was born on Mandalore and fought in the Purge. I am the last of my line.”

A gifted warrior, Bo-Katan Kryze is a legendary Mandalorian. She refused to align with the Empire’s occupation of Mandalore, and now seeking the Darksaber.

Sideshow and Hot Toys is thrilled to expand its highly popular The Mandalorian collectible series and present the Bo-Katan Kryze Sixth Scale Collectible Figure for all Star Wars collectors!

This amazing figure of the Nite Owls leader is definitely a collectible for all Star Wars fans to have in their collection!BrandStar WarsManufacturerHot ToysTypeSixth Scale Figure 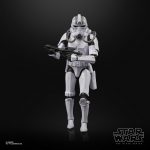