Disney is less than a month away from launching its Disney+ streaming service, so the Mouse is making sure its fans knows what’s in store for the service when it goes green on November 12. You can watch a 3 hour long trailer to see all of the 600 titles that will be available, but if you’re just in it for the Star Wars, then you can find the full list of Star Wars content that will be available day one below.

Fear not, TLJ, Solo, and TROS will all show up on the service before its first year is up. In the meantime, I’d recommend getting caught up on the animated shows, because they’re excellent, so if you’ve passed on them, now is your chance. The LEGO shows are great, especially if you have kids, but the Yoda ones and Droid Tales have some really funny moments for older fans too. 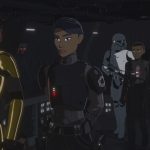