Ewan McGregor, Hayden Christensen, and Moses Ingram are making their way across the globe to promote the Obi-Wan Kenobi series, and the tour is producing some awesome nostalgia for the actors, but also for fans of the Prequels who may have been kids when they came out.

Today, three videos from the tour have been released, and they feature Hayden Christensen talking about his return to Star Wars, and the sheer weight of the Vader Suit, Moses Ingram, who discusses her character Reva, and Ewan McGregor talking about finding Obi-Wan’s voice again. .

Prequel fans will definitely get a kick out of the Hayden video, and Moses holds her own as well. In fact, there’s a great chance she becomes a standout character in the series and someone fans will never forget, but only time will tell.

Of course, Ewan is a pro at this stuff, so his video is great too, and tells a fun story about one of his first days becoming Obi-Wan again after 17 years.

Obi-Wan Kenobi is nearly two weeks away, and videos like this are a reminder of how close its long awaited launch truly is.

Nick and I will talk more about this tour on next week’s episode of the SWTS, so don’t forget to tune into the Star Wars Time Show on a weekly basis via our podcast platforms or via YouTube if you prefer the livestream angle. 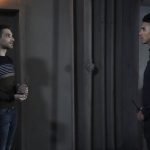