The Hollywood Reporter has confirmation from their sources that Hayden Christensen will reprise his role as Anakin Skywalker/Darth Vader in the Ahsoka series on Disney+.

This is huge news considering the recent news that his role in the Kenobi series will be much bigger than many fans initially thought. The news is also a bit surprising because of the timeline at work. The Ahsoka series will take place in the same timeline as The Mandalorian, which is post Return of the Jedi. This means that any and all scenes including either Anakin or Vader would be in flashback form.

For avid fans of the franchise, this move makes complete sense given the nature of the relationship between the Ahsoka and Anakin. The two were apprentice and master respectively, but their relationship was much more akin to big brother/little sister than master/apprentice.

This news also opens up a host of possibilities for the future of Anakin/Vader in other Star Wars properties. Until recently, Hayden Christensen had basically locked himself away from the Star Wars fandom, but it seems like his small voice cameo in The Rise of Skywalker may have reignited his desire to dive back into Star Wars.

As for the Star Wars Time bros, we have been calling for Hayden’s return since Rogue One, but it seems like Disney was waiting for the perfect time to bring the original Skywalker back into the fray. We will be sure to give you all of our thoughts on this most recent news on the next episode of the Star Wars Time Show. 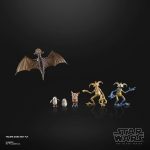