Hasbro has shown off some pretty impressive looking figures this week from its various lines of Star Wars toys, and one has to agree that the new Vintage Collection Ahsoka Tano and Darth Maul figures steal the show.

UPDATE: Apparently a bunch of other Black Series 50th Anniversary figures and a few other TVC figures were also revealed. The appropriate sections have been updated below.

The 50th anniversary Kenner-esque Black Series figures are pretty solid too, especially that sexy looking Kenobi toy, and the Elite Squad Trooper is slick too, but my goodness is Hasbro producing some gems in its 3.75″ line!

Both the Clone Wars era Ahsoka Tano and Darth Maul look just as good and just as poseable as the Black Series line. In fact, it’s now clear that the Black Series line needs a Mandalore Maul, because he looks majestic in this format, so the larger version should look even more badass. Both are up for pre-order and can be snagged via Entertainment Earth. They don’t ship until this summer though.

In addition to the Clone Wars TVC new reveals, Hasbro also showed off a few figs from Return of the Jedi that are hitting the line. These will all be Walmart exclusives.

Like I said though the other releases are top-notch too. The 50th Anniversary Kenner-esque figures are fantastic. At least Greedo and Ben — the Jawa is a pass — but the other two are definitely worth looking into. Unfortunately, Ben is currently sold out, but you can sign up for email alerts. Use the links below to pre-order the others.

There’s also a line of figures from TPM with old school card backs, which can be pre-ordered from Best Buy.

To round things out Hasbro also teased an Elite Trooper from the upcoming Bad Batch animated series. He is set to set sail this April. You can grab him from Entertainment Earth today! 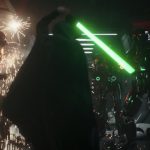