It’s no secret that Harrison Ford doesn’t have much love for his iconic role as Han Solo. He’s wanted the character killed off since the original trilogy, and he finally got his wish in The Force Awakens, but thanks to JJ Abrams, Ford wasn’t quite done with Mr. Solo yet.

He came back to play Han one last time in The Rise of Skywalker, but thanks to a recent interview, he clearly still has no idea about most of the nuances behind the franchise that made his a superstar in the first place. It’s quite funny really, and just goes to show how little Ford cares about the things we go nuts for as fans, but that’s why we love him.

While talking with USA Today, he was asked about the fan debate surround his character’s return in TROS and if he was a Force ghost or just a vision, and his response is just vintage Star Wars curmudgeon Ford.

“A Force ghost? I don’t know what a Force ghost is,” Ford said, before going into a whisper so as not to disturb rabid “Star Wars” fans.

“Don’t tell anyone. I’m not talking loud enough for your recorder. I have no (expletive) idea what a Force ghost is. And I don’t care!”

How can you not smile at his reaction to this question? Yes, we take this stuff seriously, but it’s hilarious to hear how Ford, even after all these years and all the great things Star Wars has afforded him, still can’t really stand the Star Wars universe and all of its mythologies and wizard-like lore. He’s just the best, but at least he agreed to do the short scene, which is one of the more memorable and touching from TROS.

We love you Harrison, you angry old coot! 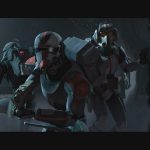 Meet the Bad Batch in Clip From This Week’s Star Wars: The Clone Wars Episode