Last week we shared Richard E. Grant’s emotional review of Star Wars: The Rise of Skywalker, and now we’re back to highlight some new comments he’s made about the film.

In particular, Grant talked to Yahoo about the film having a massive plot twist that is 40 years in the making.

“The big character plot twist that I had no idea would be coming. It made total emotional sense and story sense and I thought that was really smart. And I think that’s an incredible thing to take something that began with the first movie in 1977 [Star Wars: A New Hope] and nine movies later reach a conclusion/resolution.”

So we at least know that the twist is character related, but if it’s 40 years in the making, it almost has to be tied to Leia, Lando, 3PO, R2, Palpatine, or someone from the past we haven’t seen before in this trilogy. It’s intriguing to think about none the less.

Grant went on to caution that this film could, and probably will have a bit of Game of Thrones fallout due to high expectations from hardcore and loyal fans.

“It runs the risk of the Game of Thrones syndrome, where there’s no way you can please all the people all the time, because people are so emotionally invested in this story. The movie that they’re going to see may not be the movie they have in their heads to see. But for a four decade-long fan as I am, I thought it pulled off that feat incredibly.”

At this point we just have to take his word for it. I personally think he isn’t bullshitting us to sell tickets, but these days, that’s a hard sell for other fans, so here’s to the 19th coming sooner than later. 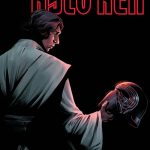