We knew a 1/6th scale Moff Gideon was coming from Hot Toys, but until today we really didn’t have any images to drool over, so thankfully HT has scratched that itch. We finally got the full look at this collectible based on Gideon as he appeared in Season 1 of The Mandalorian, and he looks fantastic.

His final price and pre-order details are still not available from Sideshow, but they should be later today or this week, so keep an eye on their Hot Toys listings. I would expect him to be in the $230-$265 range, but I could be wrong.

He comes with the essentials, which include a blaster, the Darksaber, and the Darksaber in motion effect. He will also come with a stand and a few pairs of hands. The sculpt looks pretty damn good, so I will be adding this guy to my collection, which is now nearly complete at this scale, because I like to burn money.

Here’s to the collecting bug and the many joys and pains it brings us! 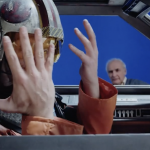 Check Out Rare ‘Empire Strikes Back’ Behind the Scenes Footage