Giancarlo Esposito sat down with EW to talk all things The Mandalorian Season 2, well at least the second half of the season, which is set to kick off with this week’s episode. In particular, he talked about some of the Moff’s motivations, his science lab reveals, Dark Troopers, and how this season and beyond will feature more world building and connections to Star Wars’ past and future.

I’ve pulled some of the more intriguing quotes for you to read below, but if you want to check out the full interview, head over to EW.

Giancarlo on Gideon getting more screen time in Season 2:

It seems that way. But I have a feeling you’ll see more of me next season. More than likely you’re going to see a lot of Moff Gideon. I can’t be sure of that, but it seems as though this iconic journey that they want you to feel it. I think you’re going to start to see other storylines start to creep in. When we start to realize there’s such a deep connection [between the show’s storylines and] the rest of the galaxy and what’s really happening. Maybe you’ll get an inkling of what he wants.

He’s implying we are going to get a heavy helping of Gideon in Season 3, which could mean the Child may end up with him at the end of this season. Yikes! It also sounds like S3 could be when the show’s world building really kicks off, as well as a direct answer as to what he is up to with his science and Dark Troopers.

GE on the potential of using M-Count rich blood to make super-soldiers:

Well, in the galactic ballpark, I think we’re all trying to figure out what does he really wants. Somewhere in my brain, I hold out something and he has some kind of ethical consideration here. When people flow out of control and there are all these different Moffs who’ve been assigned different areas to be wardens of, isn’t there one person or someone that may have guidance over all of them? They’re questions that are answered. It could be super soldiers. It could be that he wants to save the galaxy. Also, why does Moff Gideon know everything about what’s going on everywhere? He has some kind of incredible intelligence source. So I always hold out that there may be an altruistic reason that he is taking control or trying to. Certainly, the child represents the possibility of a new humanity of a new consciousness.

The interesting bits here to consider are his allusions to an intelligence source. Could it be Palpatine feeding him knowledge, or his acolytes. Thrawn? Who knows but it sounds like there is a great power out there pulling the strings.

We jumped right in on this one. I trained my attitude and I’m a physical actor so I do things to keep my body high and tight, and thank goodness I did, because as you will see in episodes to come I have a certain physicality to exude.

Yeah, I expect to see the first Darksaber battle this week in E5, but it sounds like we will get at least another one before the season is up.

GE on the direction of the series and its world building:

I’ll tease the past. We are able to refer to the historical nature of mythology that has already been laid down in previous Star Wars incarnations. This particular incarnation allows us as family members to really plant the seeds to realize a more cohesive world. So I love the fact that we’re in such a futuristic show that throws back to the history and knowledge of what a warrior really is and where the line between good and evil sometimes gets blurred with desire. It allows me to dream really big and to realize that no matter what we want to do in life, if we have the aid of people and entities that share the same feelings, then there’s hope again.

So there’s going to be a lot of battles and stormtroopers and all the dark troopers – everyone will get involved. We’re all in a fresh new place to bring it home. I’m so excited to be a part of the show that is the best there is.

I love reading a quote like this, because it shows the attention to detail that Jon and Dave are weaving into this series in a way to make it stand out and be special, but to also interweave and expand upon existing Star Wars mythos.

Nick and I will talk more about Giancarlo’s interview in next week’s episode of the SWTS, so don’t forget to tune into the Star Wars Time Show on a weekly basis via our podcast platforms or via YouTube if you prefer the livestream angle. 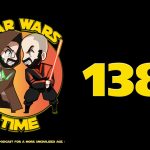