The Mandalorian’s main antagonist, Moff Gideon played by Giancarlo Esposito, is now running his own band of Imperial thugs post destruction of the Empire in Return of the Jedi.

He may not have the might of the entire Imperial governmental structure behind him, but that won’t stop him from imposing his own brand of law and order in certain parts of the galaxy.

Esposito talked a bit about the Empire’s role in the galaxy during The Mandalorian and how he is going about his business now that he is out from under the thumb of the Emperor.

“The Empire has basically fallen, so their relationship with bounty hunters is a little tenuous. I think they want to extinguish them, because they create disorder. And they create… bounty means money means it’s not coming to them. We want to tax that a little bit. So it will be interesting to see what happens out of that relationship.”

With the Empire dead, the remnants have gathered together under the direct leaders they knew and are trying to assert dominance over whatever sectors of the galaxy they can. Gideon, a former Moff, seems to have targeted the region of the Outer Rim that the Mandalorian is currently using as his bounty ground.

“Moff Gideon is very, very intelligent and very knowledgable. He’s very particular about his operation and what he does. He’s certainly rising — he was an Imperial soldier before the Empire fell. He uses all of what he’s learned and has … risen from the ranks because he has some sense of order. But yet, he can be cruel, and he will not withstand fools. And he’s a traveller. He gets around and knows everything, and no one knows why.”

When asked if Gideon is a villain, Espositio had this response.

It will be very interesting to see how Gideon and the Mando interact in this series. It is also important to note that the character played by Werner Herzog also looks to be a former Imperial, so it is possible that Gideon is either working with this character or butting heads with him.

Tons of great story lines to unfold for this show, but we still have about 2 months to wait for the official release on November 12th on Disney+. 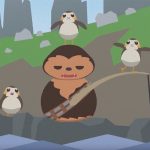