In an interview from Star Wars Celebration, Giancarlo Esposito, who plays Moff Gideon, made some revelations about the character and what he may be up to in the third season of The Mandalorian.

In particular, Esposito explained that Moff Gideon is a Warden of a particular sector in the galaxy, and that he’s trying to bring the other Wardens of the galaxy together for a reason. Apparently, the captured Gideon is running a bait and switch game as a part of this plan, but Esposito stopped short of giving away all the details about what Gideon wants the other Wardens to do.

In another interview, Giancarlo touched on the same topic, but revealed that if Gideon does convince some other Wardens that his plan to bring back the Empire is the best, it’ll lead to a few of them wanting all of the power for themselves, so we could be looking at some form of civil war amongst the remaining Imperial factions.

Thanks to Ahsoka, we do know that Thrawn is kicking around in this timeline, so is he another Warden, and will Gideon try to work with him, or is Thrawn more than likely up to his own grand plans? Fans will have to wait until 2023 to find out when Mando returns to Disney+

Nick and I will talk more about Giancarlo’s interview on this week’s episode of the SWTS, so don’t forget to tune into the Star Wars Time Show on a weekly basis via our podcast platforms or via YouTube if you prefer the livestream angle. 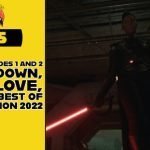