Paul Duncan, the author of the upcoming Star Wars Archives: Episode I-III book, has been tweeting out some very interesting insights contained within that relate to George’s version of the Star Wars Sequel Trilogy.

In summary, George’s version, at least back when these two talked for the book (prior to the 2012 sale to Disney), would have had Luke reforming the Jedi Order from the survivors of Order 66, Darth Maul and Darth Talon would have been the big bads, and Leia would have ultimately become the Chosen One by reuniting the galaxy as Supreme Chancellor of the New Republic.

If you’re wondering how Leia could become the Chosen One, Duncan explained it via a tweet below. Basically, she healed the whole galaxy’s wounds through her diplomacy. Works for me!

Someone on Reddit shared what appears to be a page from this Archives book, and it shed even more light on the general flow of the Sequels. In summary, Maul again would be the big bad, Stormtroopers are running rogue planets, but more importantly, the gangsters of the world were the ones messing shit up, and not an offshoot of the Empire like the First Order.

This stuff is always fun to think about and discuss, so tune into today’s episode of the SWTS to find out what we have to say! 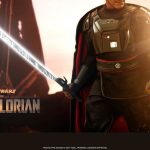