Over the past week or two a few sites and Star Wars related social media accounts have been posting news with titles that hint that the Maker himself, George Lucas, is coming back to Star Wars, in particular, the Cassian Andor series for Disney+, and we want you to know that they’re full of it.

That’s the main reason why we haven’t covered the story, which is so far fetched it’s barely even been mentioned on the popular Star Wars Leaks subreddit, but our own fans keep asking about it, and sending us links with the clickbait titles, so it needed to be addressed.

By the way, we love that shit, so don’t stop, this isn’t me yelling at you all, just some of the Star Wars outlets out there that have no shame when it comes to clickbait.

Trust me, I’d love to run more clickbait type of stuff, and have probably gotten a little bait-y myself at times, but for the most part we don’t run stuff here unless there’s some actual reality to it. The George coming back to Star Wars is just too far from reality, which is why we’ve ignored it up until now.

It just makes no sense for George, or Disney for that matter. I think Bob made it pretty clear last fall that he more or less humiliated George during the buyout process, and that George wasn’t a fan of the direction Disney decided to take the final Skywalker films in, so I doubt that George is looking to do Iger any favors. I also don’t think George ever wants to deal with fans ridiculing his visions again too. He may surely head to the set and possibly consult here or there while hanging with his buddy Dave, but there’s no way George is going to return to Star Wars at this point in his life, especially with all the drama and baggage that comes with it.

If you need further proof that this stuff is all clickbait and BS, a Star Wars insider who works for the Disney family of networks used his sources to debunk this rumor. He too thinks it’s silly, but he actually has sources to back up his claims unlike us, we just talk shit.

If George does indeed come back to Star Wars, we will eat our words and be glad to do so, but go ahead and add this one to the NEVER GOING TO HAPPEN bin.

Rian Johnson Finally Gives His Take on ‘The Rise of Skywalker’ 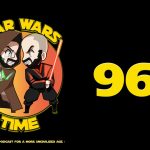