Galaxy’s Edge in Disneyland is now open to the public, and it looks like some people are trying to cash in on the craze in some interesting ways.

According to Yahoo! Entertainment, people have started selling items from the theme park on eBay and other online re-sellers. Some of these items appear to be some of the themed items that are exclusive to the park, eg: the Galaxy’s Edge exclusive Coca Cola bottles, exclusive collectibles, and even restaurant menus.

All of the items listed above seem like pretty normal things to try to hock if you are trying to scalp some over eager Star Wars fans, but it looks like people are taking it a step further in some cases by stealing simple items like restaurant sporks and cups to sell online.

While these items aren’t high valued pieces, it is still stealing and selling stolen property, which is pretty messed up. Also, if you are the type of person to steal a fork and try to scalp innocent Star Wars fans, reconsider your life choices. 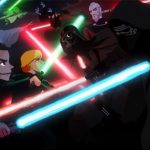