The SeizeThe Frame YouTube channel has recently released a Star Wars fan film, and its quality is pretty mind blowing considering that it is a fan produced project, and has nothing to do with Lucasfilm.

The film is titled Force of Darkness, and it imagines a fight between Kylo Ren and his hero Darth Vader. What stands out though is the top notch production value the team squeezed out of what had to be a small budget. I mean the cinematography and lighting are on point. The VFX are excellent too. It’s just an all around stellar piece of fandom that I believe other Star Wars fans will enjoy.

The only thing that could be called into question is the slower pace of the fight, but quite frankly, Vader ain’t a nimble fellow anyway, so for the most part the more methodical fight choreography still works for the characters involved. There are still some cool action moments, especially the kill shot, but I’ll let you figure out who pulls it off by watching the shot above.

Thanks for reading, if you love all things Star Wars and need a new podcast in your life, please consider subscribing to the Star Wars Time Show! Trust us, we are dumber than we look, and excel at stupid hot takes.

Rumor: Zorri’s Ship May be Connected to Rey’s Past in The Rise of Skywalker 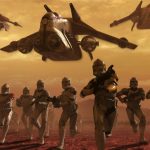