EW has released official stills for the Obi-Wan Kenobi series, and among them fans will find shots of Kenobi, a shot of the new Hong Kong-like planet Daiyu, and shots of Reva the Inquisitor questions Owen Lars.

Today is sort of a coming out day for the Kenobi series it seems, because just before the EW coverage released, the official Obi-Wan Kenobi series Twitter account gave us a Hell There welcome, so who knows what else is planned for today, but based on the EW articles, it appears we will be getting more interviews and hopefully stills throughout the week.

Below you can find the official images with pertinent descriptions if required. If you’ve been listening to the SWTS for the past few weeks, then many of the stills should flesh out some of the leaked scenes and moments that have been discussed. For example, you can get a glimpse of Reva on Tatooine and the interaction with Owen Lars that will surely lead to a heated discussion between Obi-Wan and Luke’s Uncle.

You can also see Kenobi on Daiyu, which is more than likely the Space Reno that was discussed on our show after MSW reported the leak.

Nick and I will talk more about these stills on next week’s episode of the SWTS, so don’t forget to tune into the Star Wars Time Show on a weekly basis via our podcast platforms or via YouTube if you prefer the livestream angle. 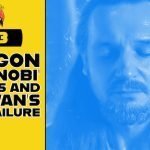