We got our first official look at Star Wars Visions, the upcoming anime anthology series coming to Disney+, this week during Anime Expo Lite. After the event, the official Star Wars YT channel posted a 3 minute long video that talked about the process finding the studios to tell these tales and the process of making this project come to life.

Episodes of Visions will not be an interconnected narrative like other Star Wars animation projects. Each episode will be a unique story told by each individual studio, and each episode will have its own distinct look and narrative direction.

There will be 9 episodes of Star Wars Visions made by 7 different Japanese anime studios. Each studio and their corresponding episode(s) are listed below:

The video below introduces fans to all of the creators who have worked on Visions and gives us all a little taste of what is to come in the series. One stand out moment came from ‘The Elder’ director Masahiko Otsuka who said that he was happy that he directed an episode of Star Wars as his final work. Masahiko Otsuka has been creating anime stories for 20+ years and has worked on some of the best anime shows in history, eg: FLCL & Neon Genesis Evangelion, so it is really incredible to hear him speak so highly of the work he did for Star Wars Visions.

Star Wars Visions is set to release at some point in 2021. 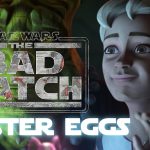