Vanity Fair is hosting a Star Wars: The Rise of Skywalker week this week, and its first story focuses on Finn, and how J.J. Abrams confirmed that fans will learn more about his origins in the final Skywalker Saga film.

In discussing Finn and his past being explored in TROS, Abrams said:

“It is part of the story of this one, and it was alluded to in Episode VII, but there’s a bit more light shed on that in this one.”

I know some fans have predicted that Finn may have a bit of the Force in him, which is why he was able to break First Order conditioning, but Abrams didn’t hint towards any one reveal about Finn’s past in particular. He just said it would be explored, but not in a super detailed, step-by-step way to explain how he became the Finn we now know in TROS.

J.J. also said that fans will get insights into all of the main character’s pasts, and how those experiences shaped them to become who they are in this film.

“I would say that each of the characters get more light shed on their histories. I’m not saying we get full, exhaustive downloads on all of their childhoods and every major step that got them to where they are. But there are a lot of questions about Finn’s past, about Poe’s past, obviously Rey and Kylo, and then some of the new characters we meet.”

It definitely sounds like Abrams is aiming to provide some legit answers to fan questions in this film, because as he explains, this is it, the time is now to provide some conclusions to open ended Star Wars plot points.

“We went into this movie very much in the mindset that this has to be conclusive. It has to. You have to get some answers. You have to learn some things.”

I’m all for this approach, so hopefully we get some awesome payoffs! We will know soon enough, because the 20th is now just 18 short days away! 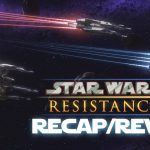