A new report has come from MSW detailing how much Darth Vader fans will get in the upcoming Obi-Wan Kenobi series, and his screen time will not disappoint.

You may not want to proceed if you’re trying to go into Kenobi as clean as possible.

Darth Vader was described in the report as being the main puller of the strings over the course of his episodes, and that his attitude is peak angry. MSW described him as doing flips and kicks, and that he’s more like the Rogue One Vader, but even angrier and deadlier. The report goes on to say that you should not expect Vader to duel Kenobi like he dueled Luke in the original trilogy. Vader is described as being out for blood, so they won’t be reminiscing about the good old days.

MSW went on to report that one of the actors playing Vader, Tom O’Connell, will also play a new Zabrak Jedi in the series. Apparently O’Connel is all over Star Wars these days, because he is also playing a Mandalorian in The Mandalorian.

Nick and I will talk more about this Kenobi new on next week’s episode of the SWTS, so don’t forget to tune into the Star Wars Time Show on a weekly basis via our podcast platforms or via YouTube if you prefer the livestream angle. 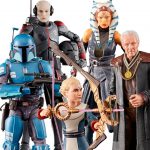