Dave Filoni sat down with Deadline to talk about the end of The Clone Wars, which is fantastic by the way, but he also made some comments that may hint at where animated Star Wars shows are headed in the future, as well Ahsoka Tano.

First up, when asked about the potential for Star Wars Rebels to return, Filoni shot that idea down completely, but left the door open for new stories to be told about characters that were introduced in that series.

No. Not really. I was really happy with how that series turned out, and I feel like we got to tell a complete story there. It was one of the things that really drove me to thinking, well, it would be great to have a complete feeling like that for Clone Wars, so now to have both is really great. I think that there’s always potential for stories that involve the characters from Rebels, which is maybe a better way to put it. They’ve all earned their place in the galaxy, so to speak, so I’m sure there’s some more of them to do.

I would take that as a, “Yes we are definitely planning on doing some more stories with our Rebels characters, it just won’t be called Star Wars Rebels Season 5.”

Deadline went on to press Dave on Sabine’s arc and getting more insights into the Darksaber, and yet again, Filoni basically confirms that this will happen without confirming it will happen.

Oh, I think it’s possible. I mean, it’s definitely something that I left hanging at the end and part of that reason is just it’s always nice in my mind when there’s another story. I like things in a series, even when I read or watch them, and there’s always a bit of sadness when something does come to an end, so potential is a great thing. I love that people are thinking about these stories in the same way that I wondered about many stories. As a kid I wondered what happened to Luke after Return of the Jedi and all my heroes. I think it’s a natural part of enjoying this, and I think there’s always potential for further stories. Certainly, I will say it’s something I’ve given a decent amount of thought to, so you never know when or if it will actually ever take shape.

The article then moves on to Ahsoka, in particular, Deadline straight up positions their question as if Rosario Dawson playing Ahsoka in The Mandalorian Season 2 is confirmed, and then Filoni doesn’t address it at all, which makes it seems as if he’s blessing the rumor without officially confirming it. See for yourself below.

Deadline: Rosario Dawson is reportedly playing Ahsoka Tano in season 2 of The Mandalorian, and there’s some great excitement about how this character you first drew for Clone Wars is finally making her live-action appearance. What is about her in your opinion that has mesmerized fans? She’s one of the few female heroes in the galaxy which includes Leia, Padme and Rey.

Dave Filoni: I was fortunate enough to learn directly from George Lucas kind of the Do’s and Don’ts, and it was a learning experience. If my team and I have had any success now, it’s improving and getting better over the years, and learning from George. That’s what makes this all work. I think people like Ahsoka because they relate to her. I think that her being very young and very brash and the way that she behaves allowed the greater scope for her to have a maturity, for her to progress and grow as a character that over a long period of time paid off. I think when people go and watch Luke Skywalker as a young man in a New Hope, a lot of people commented, ‘Oh, he sounds whiny.’  George knew to begin with a character of inexperience, whether we like that or not, and grow them in a way that the audience came to respect them.

His answer is even longer than this, but as you can see, he never corrects Deadline’s assumption that Ahsoka will be in Season 2 of The Mandalorian. What’s even more revealing is Deadline once again posits a live action Ahsoka in The Mandalorian as if it has been officially confirmed, and yet again Dave Filoni doesn’t try to correct them, so to me it implies this is happening.

Deadline: Outside of The Mandalorian, are you trying to develop another project featuring Ahsoka Tano, but more in the live-action realm, whether it’s a TV series or a film?

Dave Filoni: I couldn’t speak to anything at this point. I have a lot of ideas and I’m really fortunate that I’ve had the opportunity now to work in both animation and live action, so just getting that exposure is interesting. First for me there’s a story and then I have to decide what’s the best medium, and I think there are certain avenues open to me at this point. Right now I’m really enjoying the collaboration I have with Jon Favreau on Mandalorian. We’re having a great time making that show, and you know, we’ll see. But first, before I decide where it’s going to go, I need to decide on a story I want to tell, and invest my time in, because it’s a lot. I mean, there’s a lot riding on everythingStar Wars, especially for me personally, being here so long, I want to make sure I get it right. I’m learning, you know.

I mean he’s presented with a question that is stated in such a way that Ahsoka is 100% in Mando, yet he only answers that he’s not able to speak about any other projects he may have cooked up for the character. Maybe I’m reading it wrong, but one would think he’d respond by saying, “There’s no confirmation that she’s in The Mandalorian, and even if she was I can’t talk about that or any other projects I have stewing around.”

And finally, we learn that he only directed one episode of The Mandalorian Season 2, and at this time he’s only thinking of new animation projects.

I just did one episode this coming season. I’m really excited about it, I wrote it and directed it, so you know, that’ll be a fun thing for me, and I’ve been learning from Jon. He’s a great mentor. You know, to be in that situation in a live-action show with someone like him and a fantastic team of people, it’s a really fortunate place for me to land because you’re with people that can really help you and realize the things that you’re trying to do story-wise.

The on if he’s working on new animation:

Yeah, I’m really focused on that, working with Jon, and we’re having a great time. I’ve got a bunch of things that I’m preparing and mulling over.

If I’m reading the tea leaves here I’m going with Ahsoka is definitely in Mando S2, and that there will at least be one new animated series based on Rebels characters in the coming future. Stay tuned for more on this subject in next week’s episode of the show! 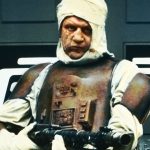