EW has released an interview from Star Wars Celebration that features Dave Filoni and Jon Favreau talking all things Star Wars and more importantly, the shared universe they created with The Mandalorian.

Favreau had a good take on why the shared universe aspect of The Mando-verse allows them to bring in new and old characters to help flesh out the timeframe in between Return of the Jedi and The Force Awakens.

“All the shows we’ve worked on, whether it’s The Mandalorian, Ahsoka, Book of Boba Fett, now Skeleton Crew, they all exist within the same timeframe. They all exist after Return of the Jedi, so I guess you would say, between Episode VI and Episode VII. There’s 30 years there that’s somewhat unexplored, certainly on the screen. To some extent it’s been explored through fiction and through extended universe stuff. So there’s a lot of room for us to tell stories and there are a lot of characters that are in play, because we know who’s around at that time. In The Mandalorian we begin to introduce those characters. We begin to remind people who knew them already or if you aren’t familiar with the other work and you are just coming in through this show we’re introducing them for the first time. And this affords us the opportunity to have stories that interconnect and characters that go from one story to the other. And that creates a very rich fabric for us to explore.”

Jon went on to explain that this shared universe approach allowed them to tease what’s to come in The Mandalorian season 3 thanks to a few scenes from The Book of Boba Fett.

“We established in The Book of Boba Fett that there was an opportunity for the Mandalorian to be redeemed, because he had transgressed against the creed by removing his helmet. And among his group of Mandalorians that is something that is not permitted. Now, we know that there are other groups of Mandalorians that have different sets of rules. In The Clone Wars we saw with Dave and also with a character that I voiced, that Mandalorians are very different there. So these different groups are coming together and we are gonna figure out how they all… The nexus point for all of those communities of course is their homeworld from which they are exiled, which is Mandalore.”

Jon also went on to discuss what it’s been like to watch Dave Filoni and George Lucas on the set of The Mandalorian. Apparently, it’s a treat to watch the Master and his former apprentice do their thing.

Favreau: “Well, he’s been on the set when Dave is directing, so I love watching George and Dave together. George, who I have the most respect for, I’ve been very fortunate to have great conversations from what I’ve learned a lot… But when I see Dave and George Lucas together, that’s like a whole lot.. Because like how long did you work together? 12 years?”

Filoni: “Close to that, at least 10… I mean, it was a masterclass. Every day, it was a masterclass, so I’m trying that every day and pass on what I’ve learned. I mean, it’s the Jedi experience I’ve had. And so, honestly, that’s my biggest responsibility now, to try to explain to people what George explained to me about why this all works. Why it’s different and unique from any other fantasy series or fiction out there. George lent it a unique point of view and it’s something that we have to take care of and work on to try to improve again and again and again.”

Finally, both Jon and Dave laid down who they think would make for a great cameo in the Mando-verse.

Favreau: “I’ll tell you, we’ve been pretty lucky with who we’ve had. We’ve had everyone from Mark Hamill to Werner Herzog. Amy Sedaris is great.”

Filoni: “She’s just Star Wars fabric now. She had no idea and now she’s in it. Which I love, she’s awesome.”

Favreau: “George. George Lucas. That would be the best cameo.”

Filoni: “He would have to be the son of Baron Papanoida or something like that. I don’t know, it’s hard for me to imagine that they would be like…” 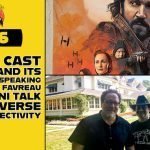 SWTS: Andor Character Details and Its 195 Speaking Parts, Plus Favreau and Filoni on Interconnectivity