A user who goes by CamVeeFX on Instagram has produced a poster for Star Wars: Episode IX that Lucasfilm and Disney should seriously consider paying him for to use for official promotions. It’s that dam impressive, and I wish I had it hanging in my mancave yesterday.

The poster features a closeup shot of Rey’s lightsaber, aka, the Skywalker family lightsaber that she apparently will fix in Star Wars: Episode IX. What’s so cool about the framing is that it allows you to see the nuances CamVeeFX cooked into it, such as the open window to the kyber crystal, and the much more unstable blade beam. It’s as if he’s implying Rey’s fix, not so much unlike Kylo’s half-ass put together lightsaber, was done in a way that creates a slightly more erratic and unstable beam in the same way Kylo’s does.

I honestly think that’d be an amazing visual if it were included in the film, and it would fundamentally change the look of the most iconic lightsaber in the galaxy, not to mention, it would further support the fact that this is Rey’s lightsaber now, and it is no longer the same Skywalker weapon she first touched in Maz’s castle.

I really don’t think anyone at Lucasfilm or Disney can top this fan made Star Wars: Episode IX poster, but we will keep an eye out just in case they get close. In the meantime, you need to check out CamVeeFX on IG, becasue he excels at producing amazing Star Wars art with toys and his PhotoShop skills. 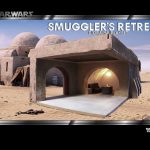