EA has dropped a new standalone CG short for Star Wars: Squadrons that is quite excellent and well worth 7-minutes of your time, so tune in below to check it out.

The aim of the short is to introduce players to Varko Grey, who is an Imperial TIE Commander and one helluva small fighter pilot. It follows Grey on a failed mission that sees the Empire having to retreat after a surprise attack by the New Republic at the shipyards of Var-Shaa.

Grey will be one of the ace TIE pilots that you as the players will fly alongside in the game’s split-faction campaign. This short definitely sets up his motivations for sticking with the fallen Empire as it tries to rebuild its authority in the wake of the Second Death Star’s destruction, and the supposed fall of the Emperor. The action is quite enjoyable too, so check it out and tune into our takes on the matter in this week’s episode of the Star Wars Time Show! 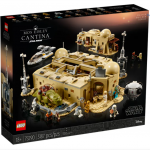