GamesRadar has shared excerpts from an interview with Ewan McGregor that will be featured in the upcoming issue of Total Film, and it sounds like he didn’t have to act too hard while filming scenes with Darth Vader and his Stormtroopers while working on Obi-Wan Kenobi.

While discussing his work on the series, Ewan revealed that this was the first time he got to act with Vader in the full suit, and apparently he wasn’t ready for the legit emotions that the moment would elicit for him:

“I’ve never met Darth Vader. I had rehearsed the scene with Vader, but not with the helmet on or anything like that. When we came to do the scene, when they shouted ‘action’, he had to come from behind me. I turned around, and fucking Darth Vader was coming at me. It was like I was six again. I’d never acted into Vader’s helmet. I’d never looked him in the eye.

It scared the shit out of me. I’m not joking. It gave me a proper jolt of absolute fear. I was like, ‘Oh my God, that’s not acting. That’s real. I’m really, truly frightened right now.’ And the same thing would happen with the Stormtroopers. I’d worked with Clone troopers before, but so many of them were CGI. I never worked with Stormtroopers, and, again, I was like seven years old again. Because when you’re actually faced with a Stormtrooper, with a blaster, it’s like: ‘Fucking hell.’

It’s like actual childhood memories of being scared. That’s how deeply it’s in us. I’ve acted for 30 years, and I’ve never been genuinely frightened when I’m acting frightened… But I had moments on this that were genuinely quite scary. It’s so funny.”

Star Wars fans have to appreciate this anecdote from McGregor, because it does sound completely genuine, which should make for a fantastic performance once we see this scene play out. It sounds more like a chase scene than the actual Vader dual scene, so the true emotions Ewan felt while shooting it should just make the whole exchange feel that much more intense.

Based on rumors and leaks, this moment, and any Vader moment for that matter, should happen after the show’s second episode.

Nick and I will talk more about Ewan’s latest interview on this week’s episode of the SWTS, so don’t forget to tune into the Star Wars Time Show on a weekly basis via our podcast platforms or via YouTube if you prefer the livestream angle. 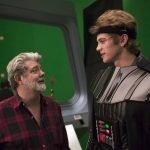