THR put out a new interview with Ewan McGregor that features a few quotes on his now filming Obi-Wan Kenobi series for Disney Plus. The article is a good read, so make sure to check it out in full, but down below are the choice Star Wars related bits.

Ewan on the Prequels and how they weren’t well received:

“[It] was hard they didn’t get well-received. That was quite difficult. They were universally not very much liked.”

Although, like many fans, including myself, the success of shows like The Clone Wars have helped to heal those wounds, and by default have made Ewan excited to get back to the Wars:

“I’m really excited about it. Maybe more so than the first ones, because I’m older—I just turned 50—and I’m just in a much better place.”

Ewan also touched on how the film tech for the Prequels ultimately led to himself and other actors losing any sort of connection to the emotions of the films:

“There’s not something to dig into in the dialogue that can satisfy you when there’s no environment there. It was quite hard to do.”

Luckily for him though, Mando tech is here, and he’s very excited to act in this new environment:

“They project [the virtual backgrounds] onto this massive LED screen. So if you’re in a desert, you’re standing in the middle of a desert. If you’re in the snow, you’re surrounded by snow. And if you’re in a cockpit of a starfighter, you’re in space. It’s going to feel so much more real.”

Ewan did touch on the fact that he’s been doing some hardcore lightsaber training, but he had to pause due to some vaccine fallout:

“For months, we’ve been doing these monster, two-and-a-half-hour sessions of sword fights and hand-to-hand stuff. But there was no way it was happening this week. Not with a 100.7 fever.”

Finally, McGregor got a bit cheeky about a casting rumor involving a young Luke Skywalker and if he’s test screened with the actor: 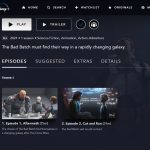 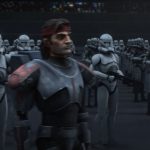 Catch Up on The Bad Batch With New Recap Video