Ewan McGregor apparently knew about his Kenobi Disney+ series for close to four years, which he revealed in a recent interview with Men’s Journal.

“It’s a f***ing massive relief, because for four years, I’ve been having to lie to people about it.”

It’s all good Ewan, we knew deep down it was happening anyway, so it was fun to watch and listen to you squirm when asked about the idea of reprising Mr. Hello There!

While we are happy for his relief now, Ewan did dish on a few more details about the show. For starters, it will only be six episodes long, and each one will be an hour long. That’s two less than I originally thought, but I guess six Kenobis are better than none, so we shall take what we get.

McGregor also touched on the series’ timeline, which will be post Episode III and pre Episode IV.

“The storyline sits between Episode III and Episode IV, the Jedi Order was falling apart. It will be interesting to take a character we know in a way and show him—Well, his arc will be quite interesting, I think, dealing with that the fact that all the Jedi were slaughtered with the end of Episode III. It’s quite something to get over.”

Notice how he stops himself when he starts to try and explain how we may see him portrayed in the series in regards to his character arc. It’s almost as if he was about to reveal a juicy secret, but then he hit the breaks and course corrected. Either way, I’m pretty sure this is the exact timeline fans would want to see, so I can’t wait to find out how Kenobi dealt with his and the Jedi’s massive failures in the Judland Wastes.

Finally, Ewan said that the show won’t even start shooting until the summer of 2020, so don’t plan of watching it until later in 2021. 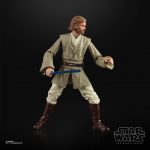