In talking with Jimmy Kimmel, Ewan McGregor revealed that he filmed a “special scene” with someone that is “very special to [him]” on Star Wars Day last week on the set of Obi-Wan Kenobi.

What’s even more interesting about this reveal is that the person is someone he hasn’t been seen on screen with before, so we can instantly take Hayden’s Anakin/Vader character out of the running. He also said that the person isn’t necessarily related to him, so your guess is as good as mine right now.

He was pretty upbeat about the scene, but also very secretive, but of course his response is speculation worthy, so we shall do just that on today’s episode of the Star Wars Time Show.

Ewan also talked about donning the old costume, which he said is “slightly different than you might expect”. He also talked about the Volume tech and how awesome it is to work with versus his blue screen days of the Prequels. 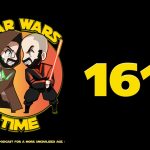