I wouldn’t take this too seriously, but an old social media post has surfaced on Reddit that features a comment from Erin Kellyman, the actress who played Enfys Nest in Solo, shedding light on her appearing in the Cassian Andor series on Disney Plus.

Kellyman replied to a fan who asked if the character would appear in the Disney Plus show by saying, “no spoilers here sorry,” before going on to give the fan a shout for her red hair.

Now again, her reply could mean absolutely nothing, but the fact that she used “no spoilers” does leave some wiggle room for fans to speculate on. Enfys Nest would definitely fit within the timeline of the Cassian show, as well as her ties to the Rebellion, so I for one would love to get some Nest in Cassian.

Stay tuned for our comments on this next week during the show! 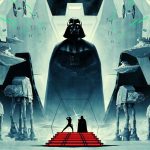 Empire Strikes Back Behind the Scenes Footage – 40th Anniversary