The Mandalorian, the first live-action Star Wars TV show hitting Disney+, has ramped up its promotions machine as it nears its November 12th release, so you can check out a new press conference, and the official list of who’s directing each episode below.

The presser involves Jon Favreau, Dave Filoni, Pedro Pascal, Gina Carrano, and Carl Weathers. The two creators provide insights into how they approached the show and what fans should expect from it, while the stars talk about their excitement and other anecdotes about working on the show and in Star Wars.

The official list of who’s director each episode can be found below. Filoni and Chow are both getting two episodes, with the latter also being tapped to direct the Kenobi series for Disney+

We’re less than a month away friends, so let the hype fully sink in at this point!

J.J. Abrams Didn’t Screw Around When It Comes to TROS’ Ending 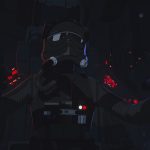