Today Star Wars collectors were surprised with another Lucasfilm 50th anniversary reveal in the form of four new Star Wars Black Series figures, which are all from The Clone Wars. The figures are Echo, Hawke, General Kenobi, and General Skywalker.

These new Black Series figs will also come in the old school TCW packaging that the 3.75″ figures came in years ago. Word is that these will all be Target exclusives, so good luck dealing with that shit show of an experience. There’s no information as to when they’ll be available to order, but YakFace has word that they have a street date of May 19th.

I will say that the sculpts don’t look the best in this wave, especially with Anakin. His face just seems off and a bit generic considering the quality of sculpts and face paints we’ve seen over the past two years. I just have a feeling this is going to be one of those shitty releases where no one gets the figures they want, so I’m trying to not get too amped up for these TCW figs, and I recommend the rest of you do the same.

Nick and I will talk more about these figs on today’s episode of the SWTS, so don’t forget to tune into the Star Wars Time Show on a weekly basis via our podcast platforms or via YouTube if you prefer the livestream angle. 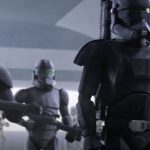