It’s been almost a year and a half since Lucasfilm announced the Lando series for Disney+, and yet there hasn’t been a single bit of information on it released.

Is it still happening? Is it going to feature the young or old Lando? Who else may be in it? All of these questions have been asked amongst Star Wars fans, but none have official answers of any kind yet.

Although, one of the questions may have been at least cryptically answered by Donald Glover on the Jimmy Kimmel show, thanks to the host asking Glover about the Lando project. Mind you, Donald Glover still isn’t officially attached to the Lando series, but here is what he had to say in response to Kimmel’s question:

“Am I? Just telling all my business. No, yeah. I have a lot of things. I like to blossom then go away. Right now is definitely the start of a another one of those. I have like a ton of stuff I’ve been working on, but I just want it all to come out at the same time so I feel like that’s what’s important.”

While his response is prototypical Hollywood jargon for not being able to confirm the existence of a project, or an actor’s involvement in a project, his phrasing does imply that he’s in what he calls a blossom phase, which means he has many projects going and they’ll drop around the same timeframe.

One could also take his “Just telling my business” report as a quasi-confirmation he is attached to Lando, but until an official source confirms, fans can only speculate on Glover’s actual involvement. Remember, only the show’s title has been revealed, nothing else about it has been expanded upon.

Having Donald G. back as Lando is a no-brainer, but from a fan’s perspective, I’d like the series to also include Billy Dee. Think of a series that is presented via flashbacks as the character reflects on their past. That’s the model that I as a fan would like to see Lando employ.

Nick and I will talk more about Glover’s interview in next week’s episode of the SWTS, so don’t forget to tune into the Star Wars Time Show on a weekly basis via our podcast platforms or via YouTube if you prefer the livestream angle. 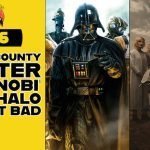