In an exclusive report from Insider Gaming, it appears that Disney is looking for a much more aggressive video game release schedule for the Star Wars franchise.

Based on the report, Disney wants one AAA Star Wars game, and one smaller Star Wars game released each year. The company essentially wants a bi-yearly rollout for its upcoming Star Wars games, which are no longer being published by EA.

Insider Gaming listed the eight announced Star Wars games in development (below), and based on insider information, some of these games still may be a few years away, so Disney’s six month cadence may already be a pipe dream unless there are other unannounced titles in the works.

It’s hard to see how Disney can achieve a bi-yearly Star Wars video game release schedule considering this short list of announced titles, but according to the report, there are a few others in pre-development. The report also mentioned the potential of a Mandalorian game, which has been rumored in the past, but there still isn’t anything concrete for it.

If Disney’s plan does come to fruition, Star Wars gamers will finally get to experience what it was like many decades ago when it felt like the franchise was a staple for the medium.

Nick and I will talk more about Star Wars video games on today’s episode of the SWTS, so don’t forget to tune into the Star Wars Time Show on a weekly basis via our podcast platforms or via YouTube if you prefer the livestream angle. 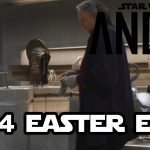