The latest Darth Vader comic book run continues this week with issue #9, and it continues his battle with Ochi of Bestoon as he tries to figure out a few of Palpatine’s secrets on Exegol.

Head on down below to check out the full breakdown!

Darth Vader #9 2021 is out now and it continues the Into the Fire thread that has seen Vader beaten down by Palpy, hunted by Ochi, tested by the eye of the webbish bog, and now challenged by the Droid Crush Pirates of Bestoon. While it was mostly an average issue of the current Vader comic run, it did offer up some new Star Wars canon worth discussing.

The issue opens with Vader on the run from the Droid Crush Pirates, who barely test him, even without his lightsaber. He eventually quasi-rescues Ochi from their leader, but promptly bitch slaps him for being a fool and thinking he could actually take out the Dark Lord of the Sith.

Thanks to said slap, Vader regains his saber and proceeds to make short work of the clanker pirates. This does lead to some action oriented panels showcasing Vader’s rage the way it should, but again, even these pages felt lackluster because this particular thread with Ochi and Vader is getting stale.

Anyway, after Vader scraps the droids he readies a Jedi starfitghter for flight, and if you look to the right you’ll see a familiar looking escape pod, so we got a few eggs in this issue.

Vader proceeds to use his bitch slap motivator on Ochi to get more information out of him on how to use the Wayfinder. After some trickery, Vader gets what he needs out of Ochi and locks his ass up in the Escape Pod. He’s learned that the Emperor’s secrets are on Exegol, so he heads out with Ochi in tow to head to Exegol. You’ll notice another little egg here thanks to the hyperdrive ring Vader uses to head out to Sith space.

I did appreciate Vader’s utter lack of concern for Ochi’s safety during all of this, which shouldn’t surprise the assassin considering that he was sent to kill Vader in the first place, but it was very on brand for Anakin’s alter ego.

The two end up in Exogol space, at least where the red mist kicks in, but based on the cliffhanger, it looks like they will have to deal with a similar space monster to the Summa-verminoth featured in Solo.

I’m hoping issue 10 gets things back on track, because for a few issues now the Vader run has felt a bit average. We haven’t been getting great canon additions, or even Vader at his best moments, so I hope his arrival in Exegol space will yield some very interesting nuggets upon its release.

Nick and I will talk more about the issue in next week’s episode of the SWTS, so don’t forget to tune into the Star Wars Time Show on a weekly basis via our podcast platforms or via YouTube if you prefer the livestream angle. 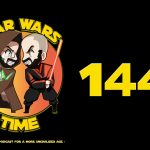