The Star Wars Kids YouTube channel has released a compilation of Darth Vader-centric shorts from its Star Wars Galaxy of Adventures web series, which recaps the Dark Lord’s journey to the Dark Side, and his rise to infamy within the Empire.

It’s a similar complication to what was done for Luke Skywalker last week, so it’s a great way to get caught up on the Vader infused Star Wars Galaxy of Adventures shorts, and the Fun Fact companion videos. Check it out above.

Discover the villain Darth Vader, the mysterious Sith Lord in black armor: Watch as Vader fights rebel soldiers with his red lightsaber, meets Jedi Knight Luke Skywalker, and bows to the Emperor of the evil Empire. Plus, learn fun facts about X-wings, TIE fighters, and more! Star Wars Galaxy of Adventures is a series of animated shorts celebrating the characters and stories of a galaxy far, far away, featuring a bright and colorful art style, exciting action, and insight into the saga’s greatest themes! 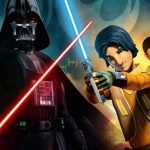