Thanks to a leak of a Black Series box, it’s now confirmed that Crosshair of the Bad Batch will betray his friends and join the Empire to hunt them down. I predicted this a few weeks ago after the latest trailer dropped, but now I get some official backup.

As you can see, Crosshair does indeed make a heel turn and joins the Empire, so he’s definitely that shady looking trooper we’ve seen hunting down the Batch in the other trailers.

Now how’s that for a solid prediction? 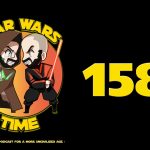 Rumor: Revan to make canon re-appearance in The Acolyte Series