We have heard a lot of talk about the beginning of The Rise of Skywalker being completely built off of a mcguffin. For those of you who don’t know what a mcguffin is, it is a plot device that is used to further or start a plot line. Basically something to kick off the story.

There have been rumors swirling for a stating that there will be a mcguffin that will bring both the First Order and what remains of the Resistance to the same planet at the beginning of the movie. From there, the two sides will move towards the ultimate goal which will likely lead to the climax of the film.

There hasn’t been too much speculation out there about what this mcguffin could be, but based on the information that we have and how this particular mcguffin is being used, as a device to lead the main characters of The Rise of Skywalker towards something else, I think this mysterious item may be a holocron.

The key fact that leads me to believe that a holocron, a Sith holocron in particular, could be what we are going to see at the beginning of The Rise of Skywalker is that whatever it is that we find is going to lead to something else. The best thing to lead a group of people somewhere is information. I believe that Emperor Palpatine himself may have created a series of holocrons that give instructions to his remaining followers on what to do after his demise.

In this theory, these holocrons would include different information than what was given to Imperial High Command for Operation Cinder. So, instead of ordering everything to be incinerated and destroy all traces, Palpatine telling his followers how to resurrect him or retrieve his essence so he can make his return to the galactic stage. This would be the perfect device to bring both the First Order and the Resistance together, as the First Order would want to follow through with Palpatine’s plan and the Resistance would want to ensure that this device would never fall in the hands of the First Order and, potentially, try to foil any plans Palpatine may have had for his return to the galaxy.

This would fall in line with what we have seen in The Rise of Skywalker trailer. Obviously, our heroes make their way to the Death Star graveyard for some reason. The information in a holocron made by Darth Sidious would definitely lead them to his death place to, as we know that Sith do not have the ability to freely travel the galaxy in ethereal form like Jedi do. This ritual would have to take place at in or near the Death Star as that was his death place, and if you find the correct holocron, you would be given the right information to lead you to the husk of the Death Star.

For those of you familiar with Star Wars lore outside of the theatrically released films, you have probably read about or seen a holocron used. This would be the perfect way to bring one of the most important pieces of Star Wars expanded universe lore into the live action films.

Let us know what you think about this theory on our social channels! Do you love it hate it? We want your feedback. Also, make sure to tune into this week’s Star Wars Time Show where we will touch on this theory as well! 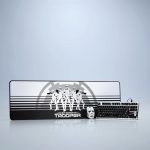