Thanks to some concept art that popped up in the official episode guide for The Bad Batch: Reunion, fans may have some answers in regards to an infamous deleted scene from The Clone Wars.

This scene (below) is none other than the duel between Cad Bane and Boba Fett that saw both bounty hunters seemingly shoot the other in the head. The scene would’ve explained Boba’s iconic helmet dent, and more than likely the death of Cad Bane at the hands of a young Boba, but it never saw the light of day due to the sale of Star Wars to Disney.

Well, thanks to the latest episode of The Bad Batch, which featured a direct nod to this duel, albeit featuring Cad dueling Hunter instead of Boba, fans got a bit of a payoff on this deleted moment. Although, Cad’s inclusion in Bad Batch may also clear up his now deleted Fett duel, because thanks to some concept art for the characters return, it looks like the duel may have happened after all, and Cad survived thanks to a cybernetic plate implant in his head.

As you can see in the image below, Cad has a plate in his head and the location could definitely be argued to be where Boba’s blast would’ve landed if they had the duel. You’ll also notice that he was given a new hat for some reason, and one could make a case that if his old hat had a blaster bolt hole in it with some brain matter stains, he probably would’ve gotten a new hat.

Based on Cad’s new design, it’s definitely likely that his duel with Fett has already played out, and it is why he has a new hat and an implant in his skull. Of course, he could’ve gotten injured elsewhere, but it seems like the writer’s may have addressed his Boba duel offscreen with these visual changes to the character.

We could still see the Cad and Boba thread play out in Bad Batch, or even in Book of Boba, but if you really analyze the state of Cad’s design, it does seem like he may have already survived some egregious injuries from a duel with another formidable gunslinger. 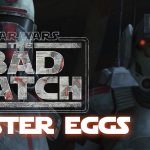